Top Tips for ‘Everesting’ by Bike 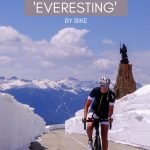 So yesterday I completed a random challenge called ‘Everesting‘. I have only attempted this once, and although I was successful at completing the challenge, my attempt was far from perfect and took me a few hours longer than I had hoped. So here is what I learnt as it may be of use to you if you’re a first-timer.

Everesting is described as a fiendishly simple concept: to cycle up and down one hill until you’ve gained 8,848m of ascent – the height of Mount Everest.

You can Everest any peak in the world by logging 8,848m of ascent on the same route in a single stint. You can take a break to eat and drink, but sleep isn’t allowed. Typical attempts take around 24 hours but merely completing the challenge is a great goal if it’s your first time.

For your climb to count, you need to follow the official rules. There are quite a lot of rules, so be sure to read them carefully if you want to make the Hall of Fame on Hells 500 https://everesting.cc/the-rules/

Here are just a few of the rules:

Choose your hill/mountain wisely! I didn’t!!!

I chose the Col du Petit Saint Bernard, a 27km mountain in the French Alps, with an average gradient of 4%, which equated to a total of 7 laps. My reasoning for choosing this particular climb initially was that I new the gradient was very gentle so that even with tired legs I could just keep spinning. However, this was a poor decision. Firstly, because the descent of 27km meant my legs seized up, particularly during the night, so every time I started climbing again it would take at least 5km of gritted teeth for the cramps to subside and the legs to warm up and loosen. Second, with the climb being so long and not very steep, meant I wasted energy moving forward without gaining enough height to be most effective. Thirdly, it meant I had to carry a lot of layers on the bike because of the temperature difference from the top and bottom of the climb as well as lots of food and drink because the loops took so long.

I would recommend choosing a shorter hill, maybe 3 or 4km, and of a slightly steeper gradient of 6 – 7 %. 30 – 50 laps of something would be much better than my 7! A fairly constant gradient would be best and a road that doesn’t have too much traffic for both safety reasons and moral.

Altitude might also be something worth thinking about. My climb topped out at 2188m in altitude each time. Can’t help but think I might have found things a little easier if I had chosen a climb at lower altitude 🙂

My final recommendation would be to ‘like’ the climb you choose.

It’s worth thinking about a convenient and safe place to set up your basecamp when choosing which hill/mountain to complete the challenge on. I would highly recommend you have it at the base of the climb, as eating and drinking will be easier after a descent than it will be straight off the top of a climb. Basecamp is usually a car or van, but you might also have a gazebo or tent, so make sure prior to the day that there will definitely be plenty of room for you. Also, give some consideration to proximity to a toilet.

If you don’t have a support crew at your basecamp to help with logistics, then its really important that your basecamp is VERY organised. The longer the event goes on, the more your mental capacity will decrease, so you need to be able to find everything quickly and easily so have everything sorted into tubs or small bags. This will be your kitchen, dining room, wardrobe, mechanics area, first aid and more. So position everything carefully, so you can be efficient in your breaks.

I personally didn’t have someone helping with logistics at the car, I did it all myself. An extra pair of hands to do things for me would have been a lovely added luxury.

As with any big event, everything should be tried and tested, nothing new or unknown.

Have at least two bike computers recording your ride… it’s too much effort to not have it recorded!! You need to work out the best way to keep your bike computers charged whilst continually using them. As some models have little quirks and try to turn themselves off when charging if your not quick enough at clicking certain buttons, so practice in advance. Hells 500 don’t except phone data so make sure you use a bike computer.

Don’t trust the final number on your Garmin. Work out how many laps you need to do prior to the challenge, and do ALL of them, as ascent data is always 100% accurate.

The amount of traffic on the climb you choose is key, you really want to find a quiet road where turning at the top and bottom of the climb is relatively safe. As traffic won’t expect you to just turn across the road. A dead-end climb can be good as you don’t have to worry about oncoming traffic when you are turning around at the top of the hill.

As well as traffic, think about the descent. How difficult will it be in the dark and when you’re tired. How technical does it become if it rains?

Finally, think about your lights, one set probably won’t last the whole night, so have a number of lights you can swap on to in your kit at basecamp or a suitable way of charging them as you ride. High Vis might be necessary during the night, and make sure the climb has phone reception or that you have logistical support who can see you at all times.

I have done a lot of multi-day endurance cycling and through this have found that I prefer to eat real food on really long rides rather than liquid food personally. However for some people liquid calories like meal replacements on events like this work best for easier digestion whilst climbing. I would suggest taking everything with you, so you can pick what your body is craving, BUT also only take what you know your body can stomach. Plan and test your eating strategy a number of times before the day! I found hot drinks as well and cold drinks to be a welcome relief during the cold dark hours.

The only downside of the day was 30 mins after finishing I was rushed to A&E! Vomiting, pins and needles in my face, arms and legs, the inability to lift my head or arms, aching bones and then my hands became rigid and clawed together etc… it was chronic dehydration. The doctor was a little melodramatic I think, but said my kidneys weren’t working and it was caused mainly by Nurofen, but also a lack of fluid (needed 50% more than what I had).

This is as much a mental battle as it is a physical one. I would therefore, recommend breaking the ride down into manageable chunks. My ride of over 9,000m vertical and 360km definitely seemed far too big, so I only ever thought about one lap at a time. I know some people like to write notes that they stick to their top bar that equates heights to different places on Everest itself, such as Everest Base Camp at 5,535m, so you can feel like you have sections to tick off.

For me, the best form of motivation was from the wonderful people who came to ride laps with me. Massive kudos to Lee Townend who rode all 7 laps to also complete an ‘Everest’, Anna Woodward who rode 3 laps, Les Ward for 2 laps, Anna Pearce for 2 laps, Elaine Bunyan for not only a lap but also for making me hot pasta and a scrummy homemade milkshake, Izzy Milne Ali Watson & Robbie Milne for 1.5 laps, Nick & Elaine Quinn, Matt Massey &Tommy G for a lap each. It made all the difference and made my ‘dark moments’ a lot less frequent. I can’t thank you all enough.

If you do have other people join you for sections of the challenge then make sure they know you must ride at your own pace. They will have fresh legs and are likely to be going quicker than you. Don’t feel bad about holding them up, this is your ride, ride at your pace! 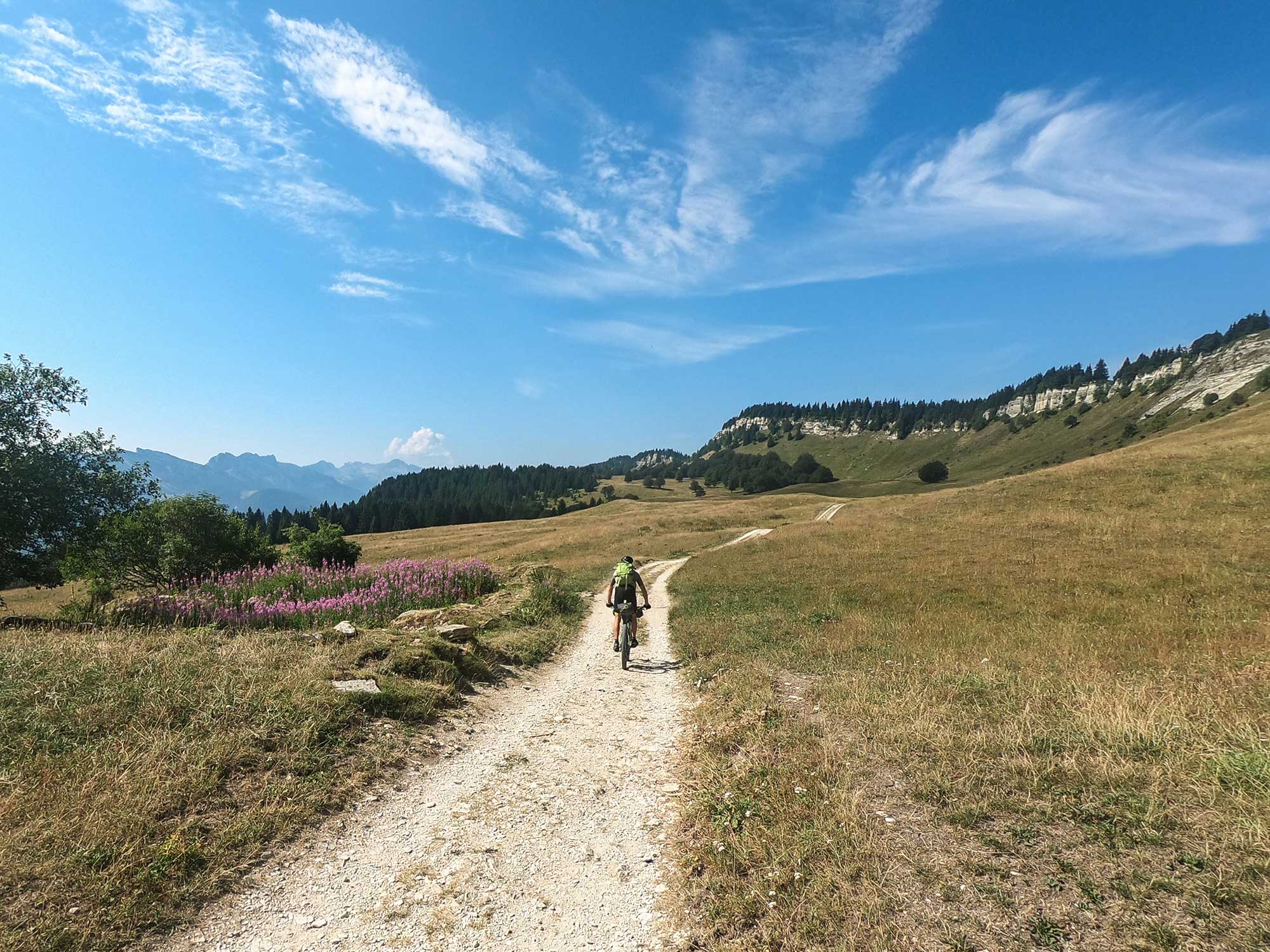 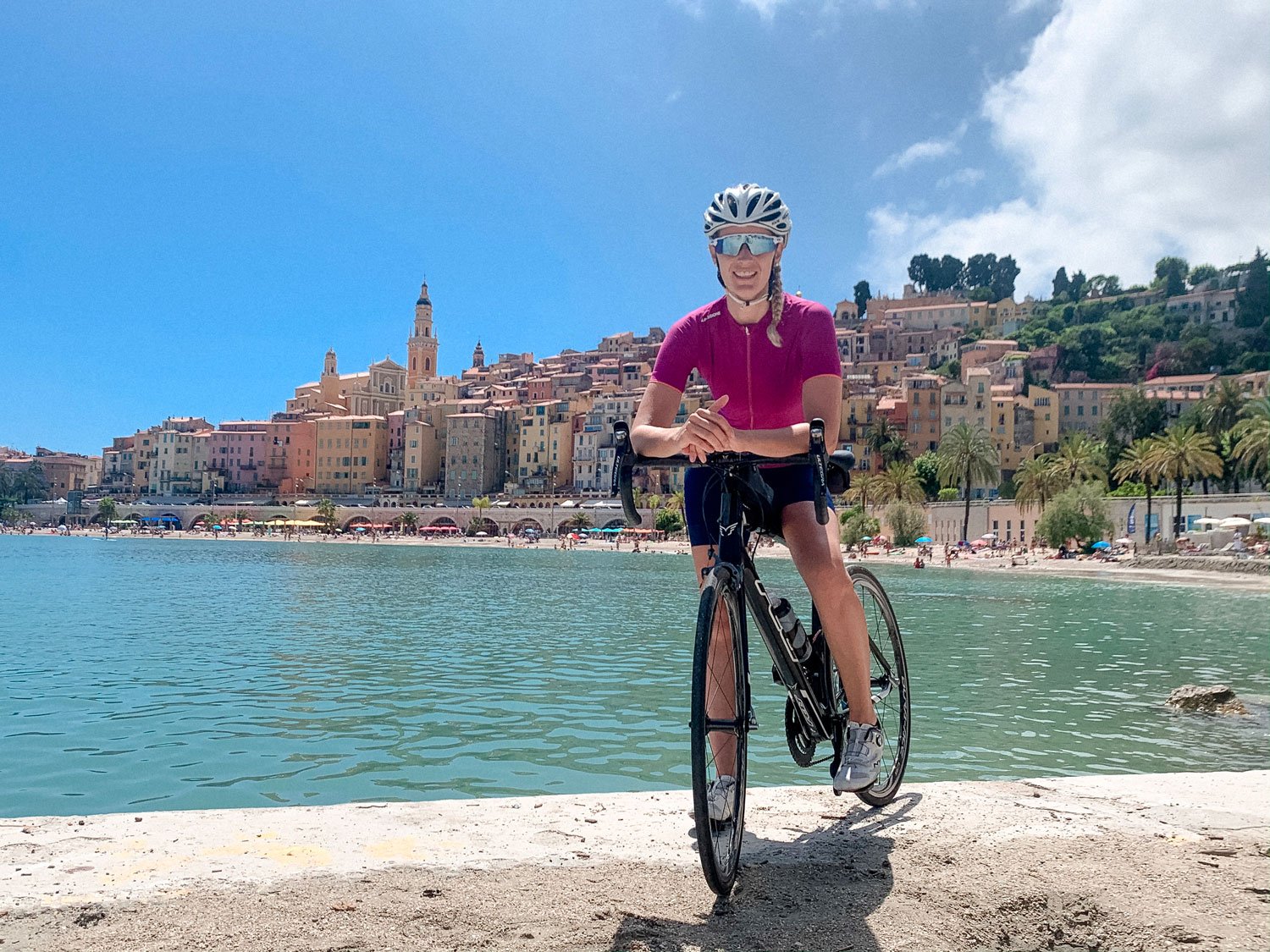 Nice & Côte d’Azur: A guide to the most amazing road cycling routes 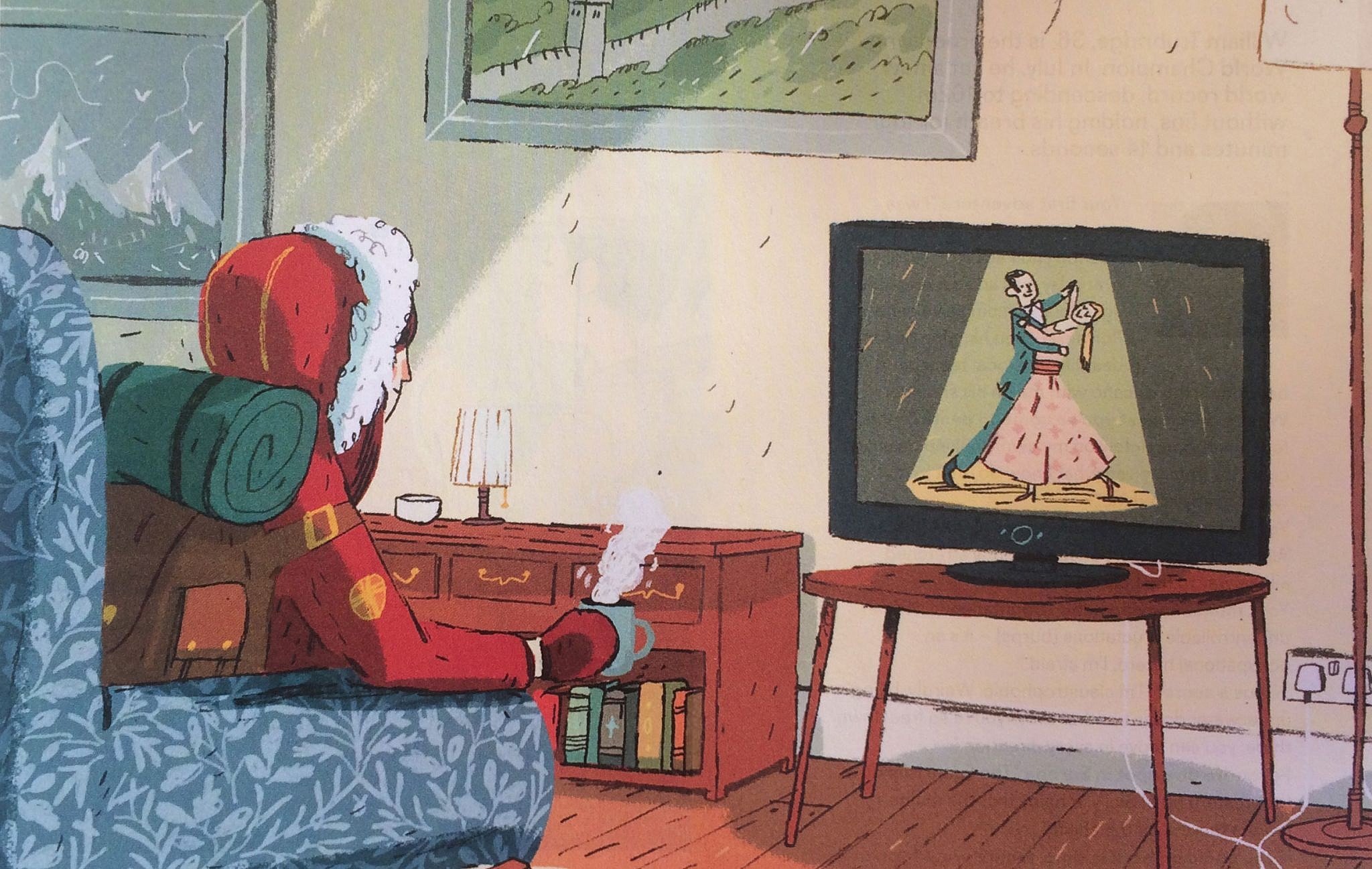 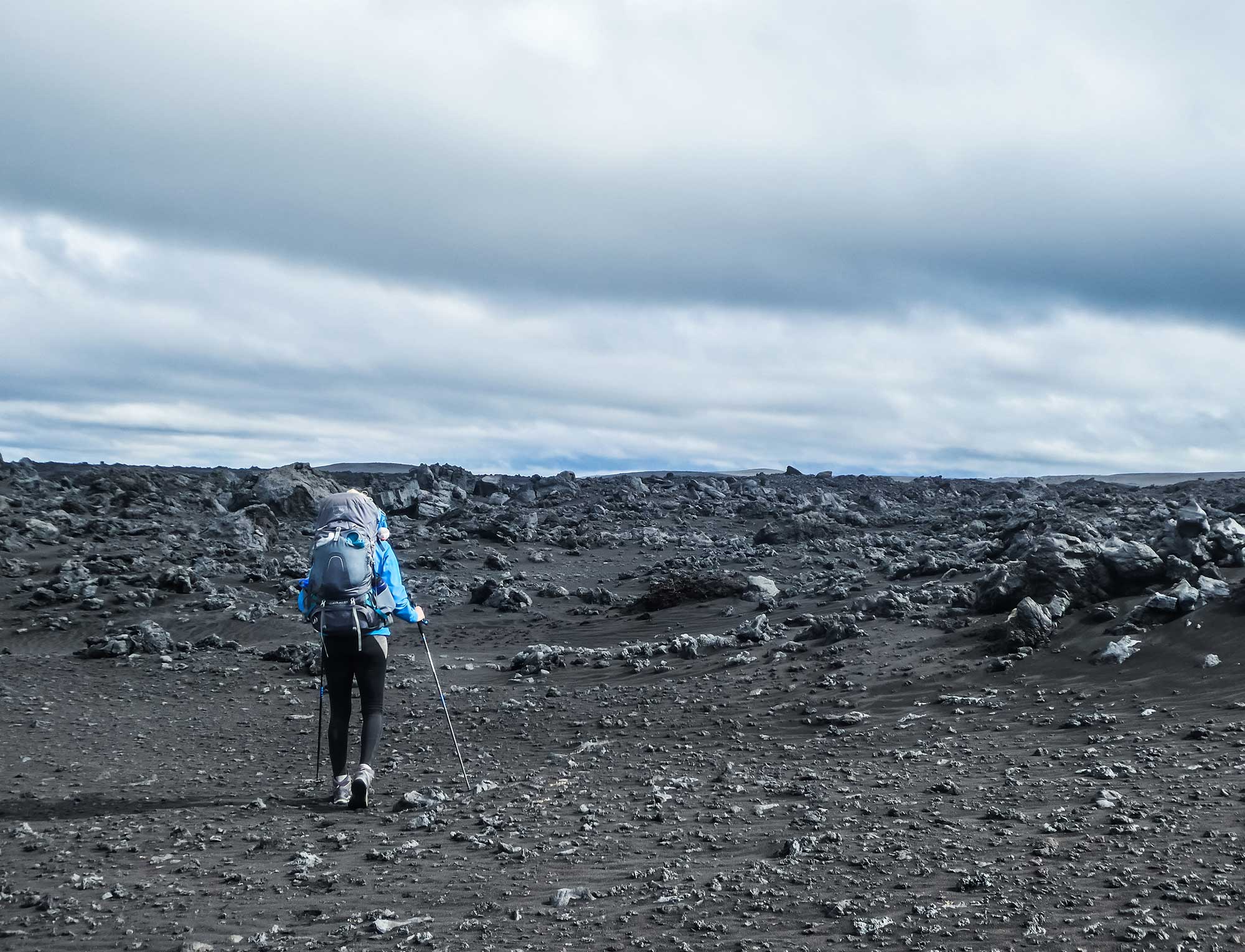