A 560km and 11,000m of climbing off road Mountain Biking unsupported bike race. The Tuscany Trail goes through some of the most beautiful places in the Tuscan region: Apuane alps, the historic centre of Firenze, San Gimignano, Volterra, Siena, Pienza, Val d’Orcia, Pitiglian and the Argentario peninsula. What is Tuscany Trail? Well it’s not technically a race, although most of the field are trying to complete the route as quickly as they can and are ‘racing’, but at the heart of it, is an adventure. It’s an unsupported bike adventure race of 560km distance, 11.000m of elevation and with 528 starters this year (making it the world’s biggest bikepacking race). The mass start is from the Piazza Aranci in Massa (MS) and the finish is at Capalbio (GR), with a GPS track given but nothing more. Where you sleep, if you sleep, replenishing food and drink and maintenance of your bike is all up to you. Of the 570km, with an elevation gain of 11,700m, 65% are off-road, including sections of the famous Strada Bianche and a ton of singletrack. …continues below 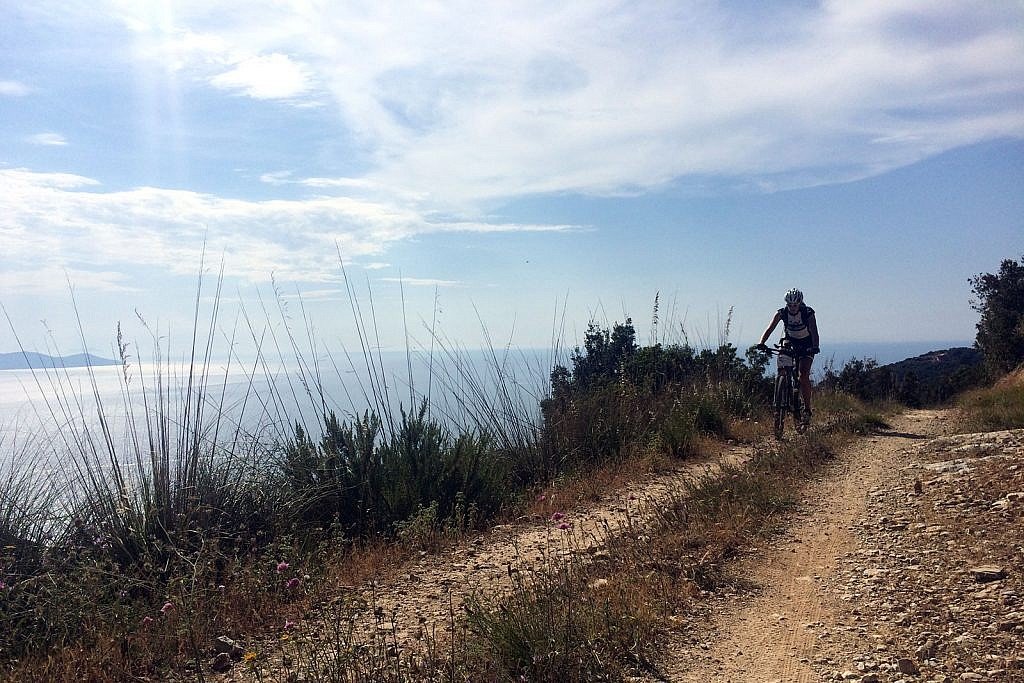 I didn’t really know anything about mountain biking, but when I entered the TT I figured peddling was peddling… I then borrowed a friends bike for the race, went out on it 4 times to get the hang of mountain biking before departure and was quick to learn it takes me a VERY long time to get anywhere!! I also took a couple of tumbles (I’m not a natural). So to say I was nervous on the start line was an understatement.

Tuscany from top to bottom was absolutely stunning and was everything I expected and more. As for the event, well that was quite a bit tougher than I had anticipated. The amount of technical single track or steep rocky slippy descents was far more than I was prepared for with my zero skills at mountain biking, which meant I walked or ran pushing the bike a lot!!!  I therefore was thrilled when I finished the challenge in 3 days and 11.5 hours (especially with the biblical rains of the first two days!) Finished 76th overall from the 528 starters, and 3rd female (4hrs behind 1st lady in.) The two ladies in front of me where also experienced winners on the 24 hour MTB circuit.

Day 1 – 115km 3453m
The rain was relentless, the roads, tracks and paths could have be mistaken for rivers. Despite wearing waterproof clothing from head to toe, including large heavy duty bin bags on top of that, I was soaked through within 30mins of the event starting. The camaraderie of this event was fantastic, and as it is a set route it meant that for day 1 in particular you where riding with others, which definitely spurs you on up the 30% climbs. I climbed pretty well i think, passing through the pack, only for everyone to then pass me when it came to a down hill section. But in all that rain there were serious crashes to be had descending, so I ran pushing the bike where I could and walked the rest. Sadly I didn’t really see any scenery, as far as I was aware I may well have been in the Borneo rainforest, lush green mountains sat in the rain clouds. It was a remote section of the ride, and when plotting the GPS route I could see I was going to have to rough camp the first night as there was no accommodation options. In the planning stage I had anticipated sleeping in a grassy field under the stars. The reality of being soaked to the skin and sleeping out without a tent was not so pleasant. I found a lean-too of a derelict building in the woods (yes picture the set of a horror movie) to provide some shelter from the rain and laid out my €6.99 decathlon sleeping bag with a foil blanket over the top. As you can imagine being damp and cold meant little sleep, but I told myself that my legs were resting. Oh and I was joined by a rodent during the night scuttling across my foil blanket which scared the life out of me.

Day 2 – 136km 2768m
Still it rained!! First task was to get off the mountain, and the descent took 2.5hours. I was exhausted and it was only 8am. The major difference with this race to the transcontinental, is how exhausting the concentrating was. Every second I was watching each stone, puddle, mud rut, wondering whats the best line, asking myself should I walk this bit. Your wrists take a hammering stood up with your weight on them for 2.5hrs, and because I was so nervous I was incredibly tense which is also knackering. On the road bike at least, you can just get on the tri-bars turn your music on and just peddle. Also navigating on the mountain bike was more intense as the turns came thick and fast so you had to be watching the garmin constantly. Once off the mountains, I was on the first of many of the famous white gravel roads of Tuscany and it was a pleasant rest bite from all the technical stuff. Next was Florence. Despite being there for less than half an hour, I loved it and definitely would like to go back. Navigating through the city sights weaving your way through thousands of tourists was a time consuming process but a novel one that I greatly enjoyed. After Florence the sun came out, but so did the hills. The hills that you think of when you think of Tuscany. With beautiful mansions on top of each one, with the tall slender trees lining their driveways. It was stunning, but seriously steep!!! Up and down, up and down… I was suffering!! By 5pm in the afternoon I had little left to give and the only saving grace was all the men I was cycling with were finding it equally as hard and pushing their bikes up and over rocky paths, wading through fords, and battling to move the bikes through thick wet muddy clay that stopped the bikes dead. By 8pm the tears had started, every time I looked down at my garmin the kilometres counter had not seemed to have moved. It was sole destroying. At 9pm I reached a hotel for the night, and I was physically done in, shacking, dizzy, feeling nauseous… it was definitely in the top 3 of the hardest days I have ever had on a bike!

Day 3 – 143km 2786m
A new day and a new lease of life. The countryside eased a little, still rolling hills but more gradual and forgiving, the weather was overcast but dry. The bike was in a hell of a state and making some very awful noises so in Sienna a jet wash and a can of WD40 was in order to get me back on the road. After Sienna the route followed the famous L’Eroica and weaved its way through the Chianti wine region. I passed through some stunning medieval walled towns and villages, all on top of steep hills of course (this is Tuscany after all). Come 4pm I was heading towards a monster black electrical storm, put all my kit on including the bin bag but it was no use I was drenched through in just a couple of minutes. Bum rash from wet shorts 3 days in a row is really not pleasant I might add! But I rode okay and made a hotel ahead of schedule and other than a mouth full of ulcers and acid spots that made eating my dinner super uncomfortable, I was feeling good.

Day 4 – 176km 2761m
It was always going to be a big one to make the finish, so the alarm went at 3am and I was on the bike by half past. The day started with a very big climb and it took me all the way until dawn to get up it, but dawn made descending the other side much safer and quicker. Today there was wall to wall sunshine and the landscape changed yet again to farmland as I headed towards the coast. It was the first time I cycled for hours and hours and didn’t see any other riders, it was a little worrying as I kept panicking that I had plotted the wrong route or something. As it happened I just don’t think anyone else fancied a 3am start! When I hit the coast the route took us round and up and over a stunning rocky island. I knew the finish was only a few hours away so I was in my grove and climbing like a woman possessed. After the island, on a long strip that joins the island to the mainland the route passed through an incredible forest, it was utterly magical and filled with deer and would probably be my most favourite bit of the whole trip. With only 10km to go the route turned onto a path that had deep black sand which I found impossible to ride through as the bike just slide out from underneath me so I was back to pushing. Thankfully the last few km’s were on the road and I could relax onto my aero bars, turn the peddles and smile all the way into the finish.

Highlights… The stunning scenery, the wildlife and the camaraderie.