In 2009, my partner Tarka and I completed the longest crossing of the Southern Patagonian Ice Cap by any British team and the longest ever crossing by a woman. These were not, however, the accolades we had set out for! We had set out with the intention of becoming the first to complete a full length unsupported crossing of the world’s third largest ice cap without the aid of sail kites: but when our tent was destroyed in one of the most hostile environments on earth the goal became merely ‘survival’.

On the 24th August we started our ascent of the Jorge Montt glacier, the ice cap’s most Northerly point, with the aim of finishing at it’s most Southerly point, the Balmaceda glacier. After a gruelling 30 days on the ice, and nearly three quarters of the way through our journey, our tent was critically damaged in a raging and unrelenting storm. Forced into the elements of one of the most hostile environments on earth without a shelter, our only goal was to stay alive and make our way to safety. We spent the next 5 days battling our way down the incredibly technical and difficult Spegazzini glacier, creating survival shelters along the way. …continued below 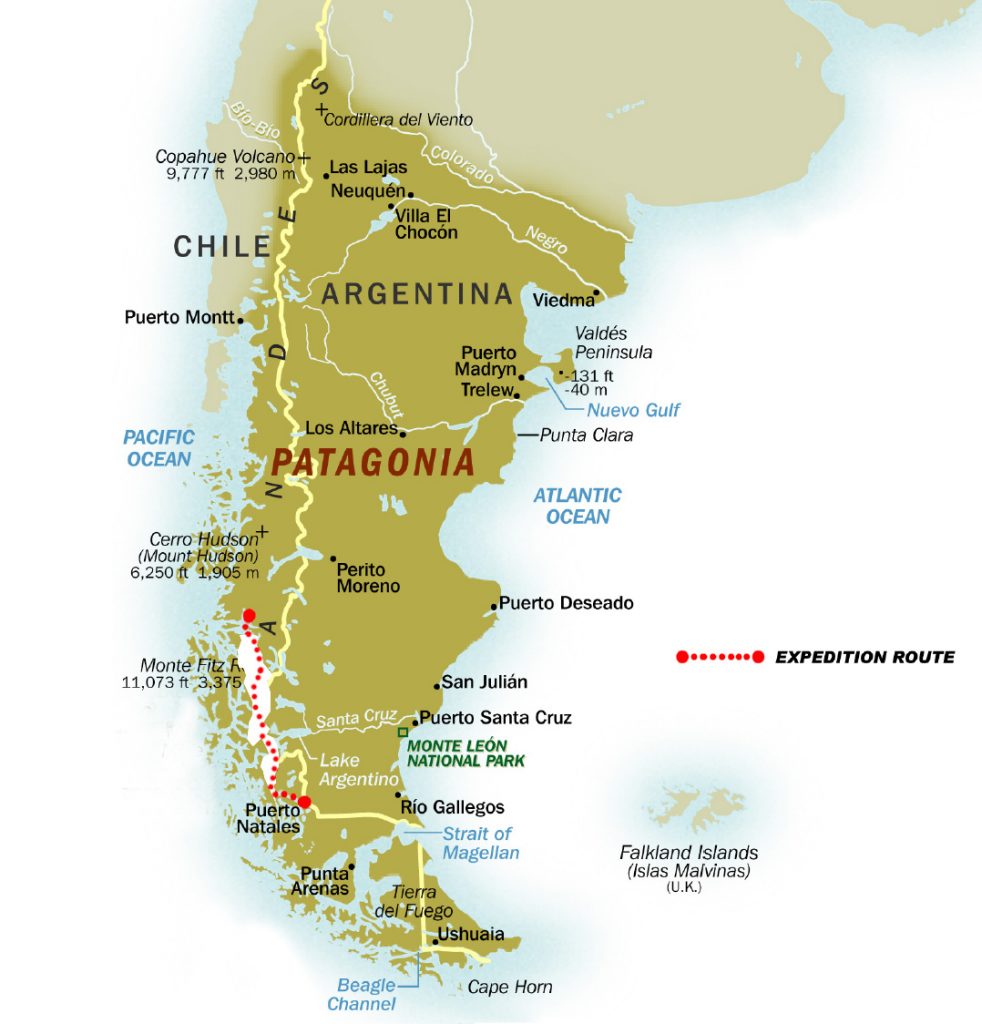 During the first 25 days we made exceptionally quick progress due to our ‘fast and light’ approach. Unlike previous expeditions, which have used large polar sledges or even kayaks to man-haul their equipment, we opted for backpacks with tiny 1kg micro sledges strapped onto the packs. Although this meant we could only take half the amount of supplies previous expeditions had taken, it did enable us to move twice as fast.

As we ascended the Jorge Montt, climbing from sea level to a height of over 1300m, we traversed laboriously through the various stages of dense vegetation, then up and over the steep scree slopes before dropping onto the glacier. Before we could reach the plateaux, we had to meticulously pick a route through the vast crevasse and cerac fields in near zero visibility. The feeling of having to carry a 50kg backpack was excruciating at the best of times but having to tread cautiously as well was a nightmare, I couldn’t have carried another gram, my knees were buckling with every step. Despite the excessive weight, it was considerably quicker and easier than hauling and shuttling the 120kg sledges of equipment used by our predecessor. Once up onto the plateaux we were able to tow our backpacks on the micro sledges, resorting to carrying the packs again when we encountered crevasse fields or mountain passes.

The ice cap arguably has some of the most ferocious weather in the world. The winds would regularly gust at over 140 km/hr knocking me to the ground; blizzards and zero visibility became everyday occurrences. In our 35 days on the ice we saw blue sky and our surroundings only 3 times. For the other 32 days we could see nothing but each other and the tips of our skis. It’s a bizarre feeling, navigating your way around the base of mountains and over cols, yet never even catching a glimpse of them.

In addition to the problematic weather, we also had to continually navigate our way across mammoth crevasse fields. Towards the latter stages of the expedition we would regularly fall down several crevasses a day; occasionally we would ski over the edge due to poor visibility, but more regularly we would hear the thunderous crash as the snow bridge gave way beneath us. As Tarka was in the lead, he took the vast majority of the falls. Some were innocuous; while others I had to drop to the ground becoming a human anchor to halt his falls on the end of the ropes. …continued below 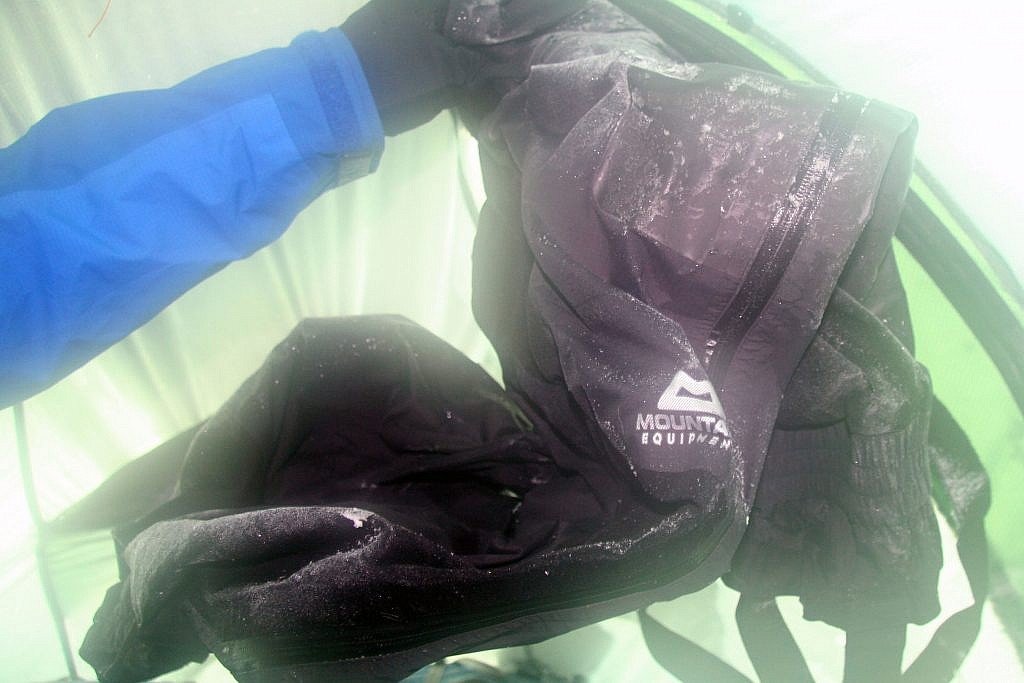 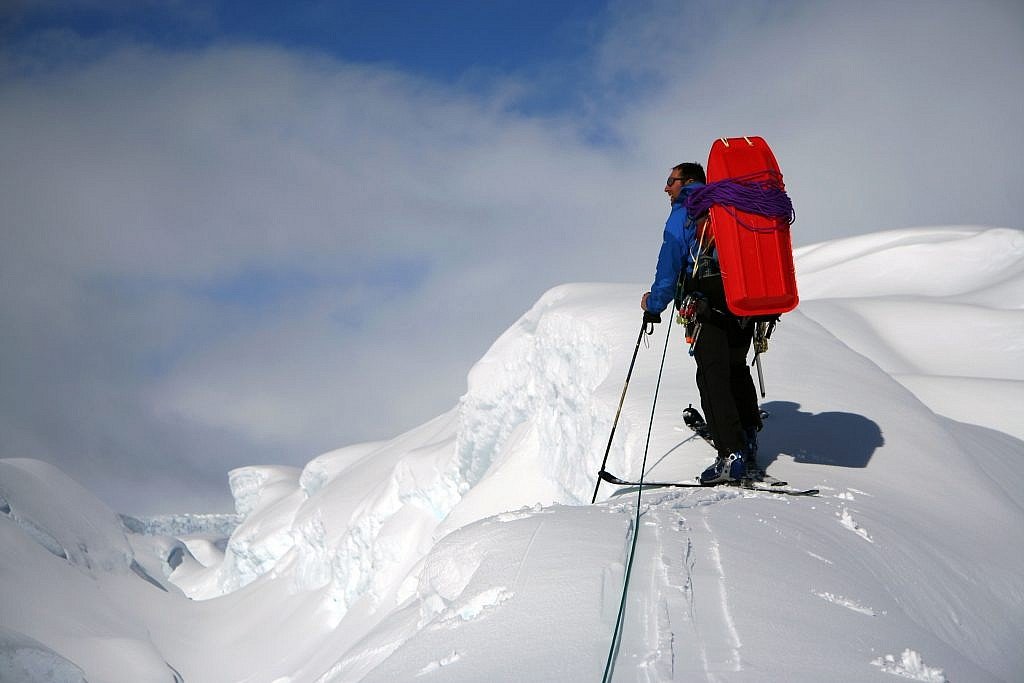 As with most expeditions we suffered from routine injuries. My feet suffered the most, blistering and harbouring infection from day one. I reached a point where there was virtually no good skin to be seen, and despite heavy bandaging, walking was excruciating.

Day 22 bought the first serious incident, when I collapsed with acute Carbon Monoxide Poisoning. I suffered a seizure before becoming unconscious. Considering we were well practised at tent living and cooking in the porch. It was a complacent mistake, due to the storm outside we must have closed the vents too much. I only remember coming round with Tarka screaming my name. After extensive discussions with the expedition doctor and a 12 hour observational period it was deemed that I was in good enough health to continue.

On the 19th of September we reached by far the most technically demanding and dangerous section of the expedition, the Fella Reichert and Cerro Mayo. With in a space of a few kilometres the ice cap bottlenecks leaving no other choice than to descend a steep jumbled ice fall with unstable blocks of ice the size of houses. Once through the ice fall there is a steep climb from near sea level up to 2363-metres, the summit of the Cerro Mayo, before a 400-metre rappel off the vertical ice wall the other side.

We were halted by poor visibility in amongst the crevasses at the mouth of the Fella Reichert and waited tent bound for 5 days. Painfully aware of the time constraints we were under with our ‘fast and light’ approach, we reduced our food intake to half rations. A rapid deterioration in the weather forced us to set up camp in a precarious position amongst crevasses. Our position was, in fact, so precarious that Tarka, whilst shovelling snow blocks to build a protective wall, plummeted underground when the snow gave way only 3 metres from the tent. His fall was broken by an hourglass shaped crevasse, and he was able to climb out with the aid of the shovel before the middle bridged section collapsed.

After 2 days, the weather deteriorated into the worst storm of the journey with winds gusting in excess of 140km/hr. Matters were complicated by the unbelievable level of snowfall. Every 8 hours the ground level rose by almost 3ft completely burying us inside our tent. We then had to dig our way out before clearing the guy ropes and anchors around the tent. Struggling to stand, we crawled around moving the tent to new locations. We repeated this process for 2 further days before the weight from the snow become too much for the tent poles to bear and during one of the moves a pole snapped. In a matter of seconds the next pole broke and within moments the two poles were broken in 5 places. In the absence of the tent poles providing a supporting structure the tent became little more than a canvas rag and was whipped around by the wind accordingly; the sharp end of the shattered poles tearing through the fabric and destroying our only form of shelter. It was an unbelievably desperate situation and the ensuing 2 hours were without doubt the most critical in the entire expedition. Losing your tent is an explorer’s worst nightmare; it can often be the difference between life and death, a sanctuary against the harsh elements, a place to cook and get warm.

Unable to fix the poles due to the raging storm and lack of repair kit remaining, (unfortunately the repair tapes from the tool kit had been used on my feet once I had dispensed of all the medical supplies) our fortitude and survival skills were put to the ultimate test. The snow was falling too hard to build a snow hole, it would have literally buried us alive, and dispelling the instinct to ‘cut and run’ we rebuilt our camp creating a pyramid shelter as best we could with the remaining tent fabric and our skis and ski poles. Once inside we huddled in the tiny space and devoured several days’ rations. It was imperative for us to eat well in order to increase our body temperature and enable us to think clearly so that we could make the right decisions. It was during this storm that Tarka developed frostbite in 2 of his toes. We spent the night taking turns to clear the snow from our shelter every hour, and the rest of the time formalising a procedure to get ourselves off the ice cap and to safety. The expedition goal of a full crossing was over.

By first light the storm had subsided slightly and visibility was a fraction better. Knowing that enough snow had fallen to bridge many of the surrounding crevasses we set off for the closest glacier, the Spegazzini. Despite being aware of the difficulty of descending the Spegazzini Glacier, we had calculated that it offered us the best chance of survival due to its close proximity and rapid descent profile. Unfortunately during the initial tent incident my goggles were damaged and so I was left with only my sunglasses to protect my eyes in the storm. Providing almost no protection from the sharp ice crystals being blown into my eyes, my vision quickly deteriorated as I developed snow blindness.

In total, we spent 5 nights in makeshift shelters as we negotiated the descent from the ice cap in storm conditions. Tarka, leading the way, used his ski poles to test the snow thickness ahead of him and I followed some 10 meters behind on the end of the rope. In all, Tarka fell down 8 sizable crevasses during the descent. By the evening of the fifth day we reached the end of the glacier and to our profound disappointment found it to be sheer faced and particularly unstable. We had hoped to leave the ice cap as we had arrived, by boat, but the unstable nature of the glacier mouth made it unsafe for a boat to collect us. Subsequently, the El Calafate 42 division of the Argentinean Gendarmerie were called to provide a safe pick-up by helicopter.

Where the wind drops you to your knees and the snow buries you alive!