The Great Wall of China

After 167 days and 4500km I became the first to walk the entire length of the wall, unsupported, from its western most terminus to its eastern most.

On 2nd October 2006, after 7 months of training, my partner Tarka and I began our journey along the Great Wall of China inauspiciously, starting with an hour long battle with the taxi driver at the start line, Yumenguan in Gansu province. He refused to abandon us deep in the desert, protesting it was too dangerous.  The vast expanses of sand of the Gobi desert stretched out on every compass bearing. Somewhere in the torrid desert heat of the days that followed we must have become complacent about our water treatment and a contaminated water supply led to a disastrous chain of events that almost put an end to the expedition before it ever got going.

The sporadic vomiting and occasional diarrhorea that afflicted me almost instantly, rapidly deteriorated into a life threatening condition. No longer able to retain my precious water reserves and my body rejecting the small quantities of food I was consuming, weakness and dehydration began to overwhelm me. Two days later, after some very feeble mileage, my condition reached a critical level. My level of hydration became dangerously low in the 35°C mid day heat. After Tarka had made me comfortable in some make shift shade, he left me with one of the satellite phones and some water, and after taking a GPS of our location, headed off to get help. …continued below 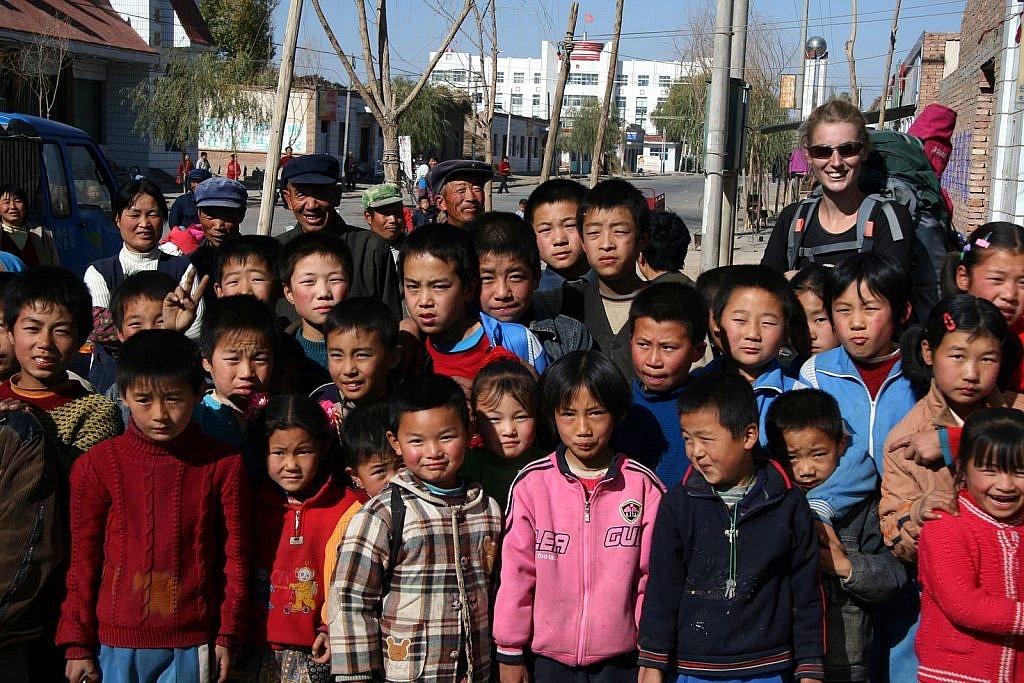 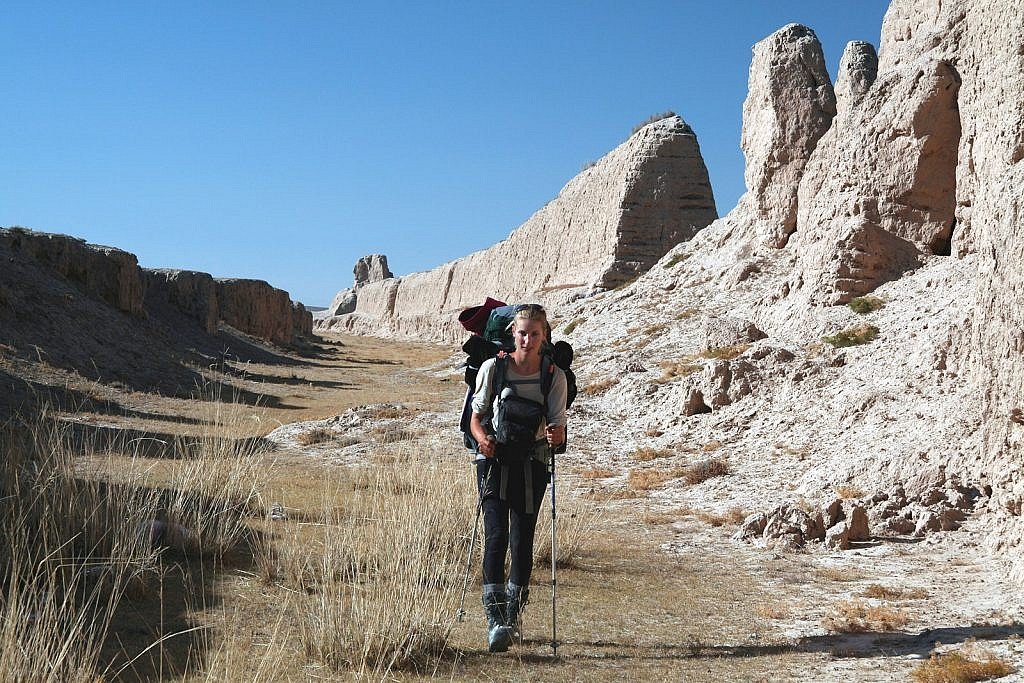 The intravenous fluids continued to drip slowly into me all day and night as I lay in the hospital bed, finally coming around again, and after four days rest and recovery we were able to taxi back out to the desolate spot that had seen a whirlwind of activity only days before. To think it was now only week 1!

The food options caused me a great number of problems. With reference to local foods our culinary vocabulary, being a little on the thin side led to some controversial dining. On my arrival in China, my stomach proved to be somewhat reluctant to digest the Chinese cuisine and consequently when my first dish of pig’s ears, trotters and intestine was served, Tarka deemed ignorance the best solution, only telling me on completion of each meal! During the 6 month trek we enjoyed everything from chicken’s stomachs to larvae, often in farmers houses carved out of the rock face deep in the mountains.

Deep in the desert we also faced one of their largest storms. On sighting two towering dust devils swirling majestically in the distance, I silently watched in bewilderment at such an incredible sight.  As it changed course and headed in my direction I noticed it preceded a huge sand storm. The winds knocked me straight off my feet and in a bid to blunt the worst of the storm we erected the tent behind the best shelter available in such barren landscape: a dune. With the sand too fine to hold firm the pegs in such an onslaught from the wind, we resorted to burying the tent a foot deep in sand, with the combined weight of the bags and our bodies to keep it stationary.  Laid out across the ground, with the roof being blown flat across us, we covered our faces in their silk thermals in an attempt to filter some of the sand that filled the air making breathing thoroughly uncomfortable.

The presence of the Great wall throughout the first half of the journey was very sporadic. Built from little more than sand and mud, the onslaught of the winds over the centuries has eroded the magnificent structure, to little more than piles of fine sand and rubble running along the dessert.

After 500km we arrived at Jiayuguan to see my first real glimpse of the wall in all its former glory. Albeit that the world famous fort is vastly reconstructed. The wall that stretches out from it was not reconstructed and maintains much of its original splendor and magnificence. The wall steadily became more impressive as we traveled east, but only when we reached the great mountain ranges 2500km from our start point did the wall emerge in all its glory. The sandstone construction we had seen for so many months gave way to the towering stone construction that is known the world over, snaking it way over the mountains with vertical grace and unequaled grandeur. …continued below 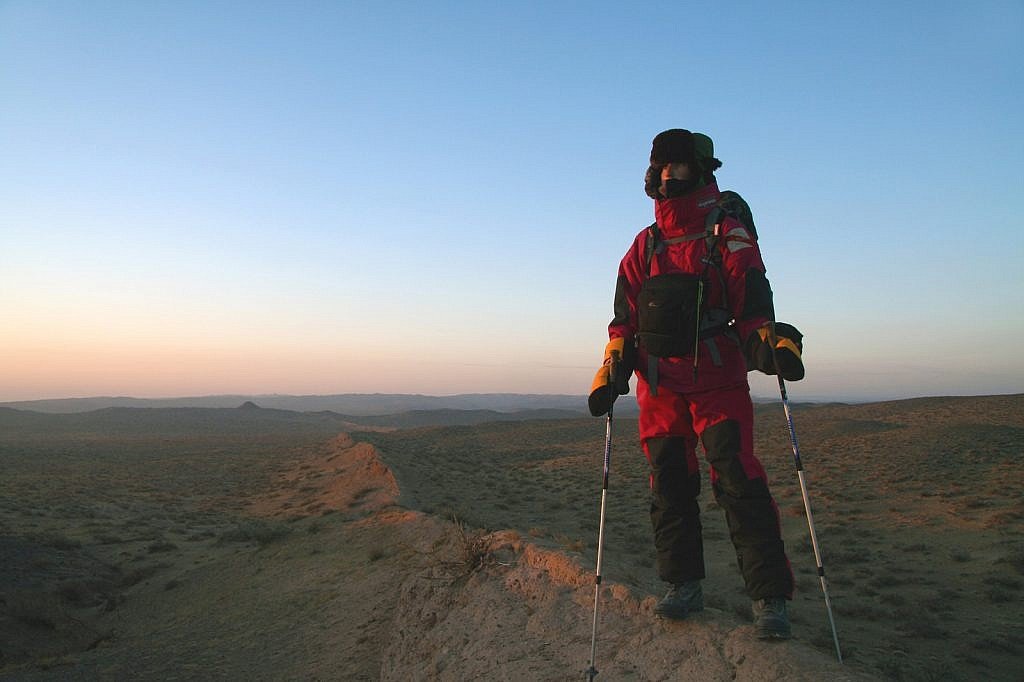 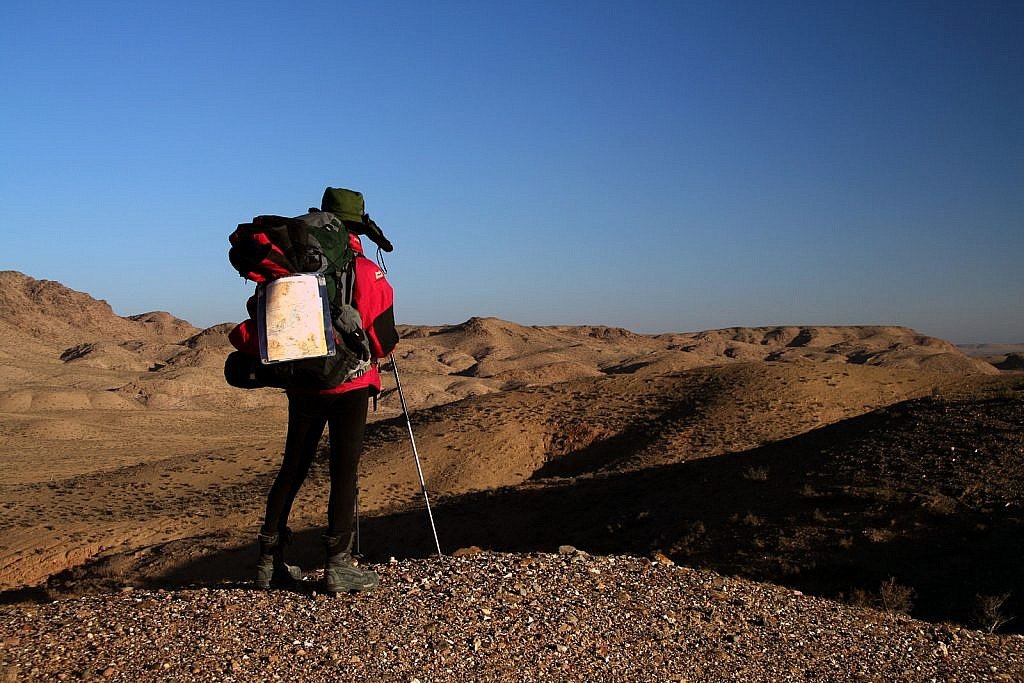 Once into the mountains, and winter being well and truly upon us, we began to endure temperatures as low as -35°C. Prior to this I had never experienced anything below -10°C, and that was getting the peas out of the freezer at home. After spending nights shivering uncontrollably in my sleeping bag I would rise to find the tent and equipment covered in ice, my boots would be ridged with frost and my eyelashes would have frozen together during the night. As I stepped out of the tent the outside air would instantly rip through my clothing and any exposed flesh rapidly developed a waxy cuticle so common in frost bite and frost nip.

After 105 days walking I suffered a major back injury that almost prematurely terminated the expedition. With a fever of 38°C and nerve endings being damaged in my lower spine due to compression from my 35kg pack, I was rushed to hospital for a second time. With only 4 rest days left available, due to visa date restrictions, the decision had to be made whether to call it a day or push on at the risk of possibly causing further damage to my back. On the fourth and final rest day the decision was made to post home any kit that was not absolutely crucial in a bid to reduce the weight of my pack to give me the best chance of making it. Everything bar the absolute necessities went, even the cooker, our source of melting snow for water and providing a warm meal when in the wilderness, was sent. All that remained was to walk the 57 straight days without a day off to the finish line.

The second great storm strangely came in the last week. In a country with very little snow fall, we woke to find that a freak front had moved down from Siberia, bringing with it the worst blizzard that Northern China had seen in half a century. Over night 2 metres of snow had fallen in places and the formidable prevailing winds were causing catastrophic damage to buildings and causing havoc on the roads. Vehicles had been abandoned and submerged under snow, buildings lay in ruins, people were barricaded into their homes and in turn, Northern China was forced to come to a stand still. Having previously thrown away our thermal layers and with our boots beginning to show signs of holes after having walked such vast distances, the storm threatened to delay us beyond our deadline. The wind swept down from the north across the open rice plains hitting us side on and bringing the bitter sting of wind burn and frost nip once again. The conditions we battled through would have been far more expected on a South Pole expedition, than those of Northern China in the spring months.

With one set of clothes and only a couple of real showers for the entire 6 months, the hygiene issues to overcome included foot rot, rashes, cysts and feminine susceptibility to infection caused by the lack of clean sanitary conditions. I washed as the Chinese locals did when I had the chance, using a bowl of water from the well, boiled and placed in the centre of the room.

Due to China’s doors being closed to outsiders until fairly recently, the isolation under which this country and its cultures developed has placed it in a world of its own. Once out of the developing cities and tourist spots, deep in the deserts and mountains a journey of cultural discovery began as we stepped into a world where westerners had never been seen in the flesh.

It’s so difficult to explain how my emotions rose and fell over the 6 months. So often I had battled to the point that I wished it all to end right there and then, when the cold bit through my clothing and the hunger caused such pain, I would ask myself what on earth I was doing. Just then, when I would have gladly gone home and given it all up, the hospitality of a rural farmer welcoming us into his house and feeding us by a warm fire would give me renewed strength to see it through to the end. I don’t believe experiences like the ones we encountered along the journey can be gained without the hardships that we suffered.

On the 18th of March 2007 we finished our epic journey at Hushan on the Chinese and North Korean border. Having accomplished over 12 million footsteps between us, the last few were very emotional made more so by the arrival of my parents who were waiting at the finish line tremendously proud of what I had achieved despite everyone’s pre expedition doubts to my capability.