LEJOG Unsupported with my dad

A wonderful adventure with my dad to cycle the length of the UK (1400km), from Lands End to John O’grotes, unsupported in less than 7 days.

So one afternoon my dad casually mentioned that he was going to cycle from Landsend to John O’grotes (1400km) unsupported. Before he had even finished the sentence I had butted in with “I’ll come too”! I’m pretty sure he actually wanted to do it on his own, but it seems he still hasn’t learnt the knack of saying no to me, so in a matter of seconds it was a done deal, we were going to do it together in a few months time. In the next breath I said “I reckon it will take us 7 days”, he quickly replied that he was thinking more like 14 days, “nahhhh, you will nail it in 7 days” I replied! ‘Throwing yourself in at the deep end’ seems to run in the family, as my dad only got on a road bike 5 months before we set off and it was to be be his first cycle event, multiday or single day, plus the furthest he had ever cycled before was 100km!! As well as choosing to ride unsupported, so no vehicle taking supplies to a hotel each night, just what we could carry on the bike and buying food and drink as we went, we also decided to follow the quiet roads. You could definitely have taken a more direct route and shaved off some miles and time, but we both wanted to be on enjoyable roads where we felt we could enjoy the countryside. This meant at times we were on bridlepaths, canal paths, gravel roads etc, but it all added to the adventure and I would highly recommend this route. …continues below 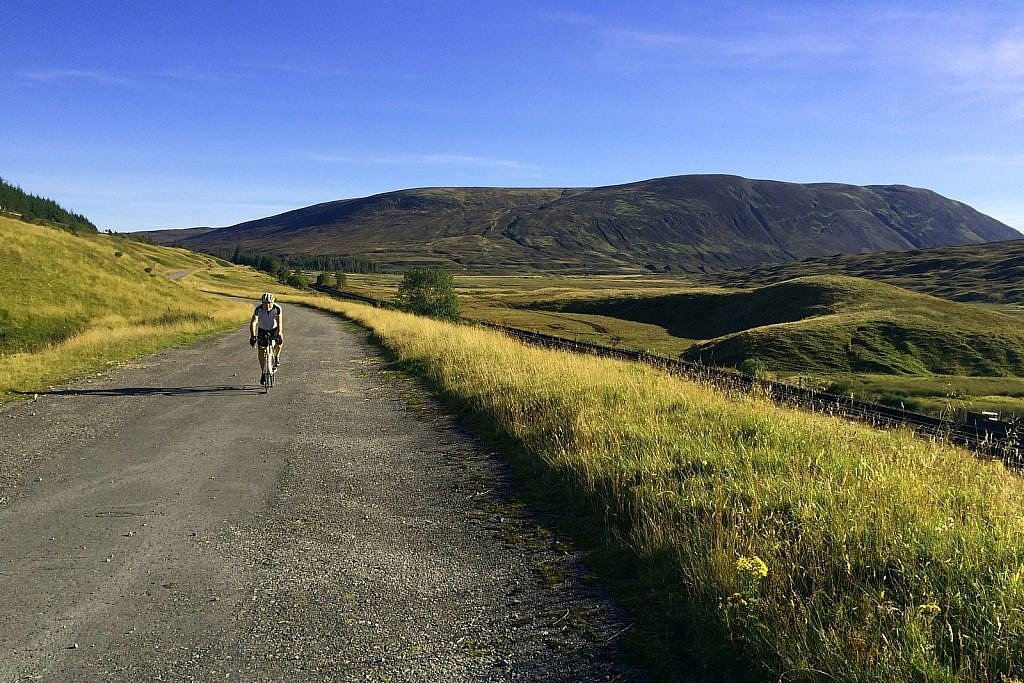 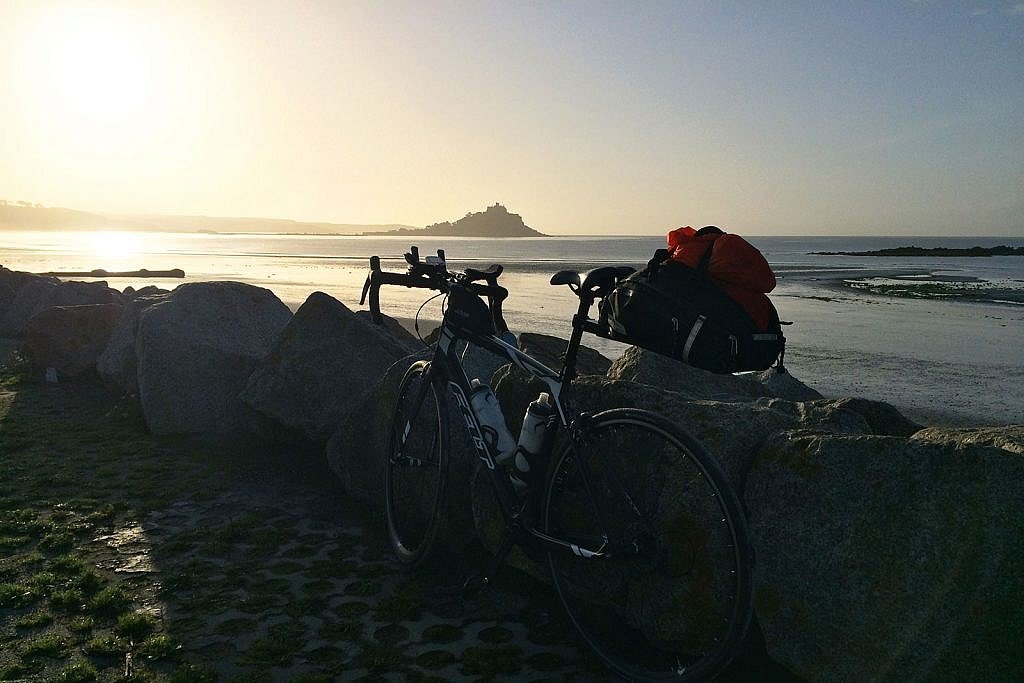 The day before we set off my saddle broke (major parts of my bike breaking the day before a big ride might be becoming the norm)! After trying various shops to replace it with like for like unsuccessfully, I ended up pinching my mums saddle…hoping it would do the job.

Day 1 summary – On the 25th September (I know quite late in the year!!) at 7am we left Landsend with a great send off from lots of the Cooper family, clear skies and not a breath of wind. It was a beautiful ride along the coast topped with a stunning view of the sun rising over St Michael’s Mount. But then after 50km my gear cable snapped… Sod’s law when it broke I was in top gear going down hill, which meant the hilly 20km detour into Truro to find a bike shop was thigh pumping stuff!! …but dad was pleased that it tired me out a little. The rest of the day went without a hitch, fuelled by Cornish pasties and we finished in Okehampton. We covered 173km, dad’s longest ever ride, with 2500m of climbing (his hilliest ever ride too) and he NAILED it. Dad was tired but loved every second of it… but then… Blue skies, bicycles, open roads, new adventures… what’s not to love.

Day 2 – the first couple of hours of the day were freezing, but the shivering was worth it as we were treated to another beautiful day. The only major event to report was an incident with a motorcycle. As we came up to a sharp bend on a narrow country lane a motorbike came flying round the corner on our side of the road. I managed to slam on my brakes as the bike passed straight across in front of me, dad wasn’t so luckily and as the motorcycle came straight at him the only way he could avoid it hitting him was to veer towards the very large ditch off the side of the road. A second later dad was upside down in a ditch that was filled with 3ft high stinging nettles. Dad was stung from head to toe, even up his nostrils! The only words of comfort I could come up with afterwards, while he cycled along covered in lumps which were stinging incessantly, was ‘well at least it will take your mind off your sore bum’. We travelled 205km with 1700m of climbing and finished in Woodford, Gloucestershire, with the Westcountry behind us.

Day 3 – Another chilly start at just 3 degrees, but we were greeted with yet another stunning dawn and sunrise. We spent most of the day on canal paths and quiet country lanes, with a number of sections that were more cyclocross/bmx rather than road bike, but they turned out to be the bits we enjoyed most. The day was beautifully British, made even better by the warm sun! I had pre warned dad that day 3 would be the most painful (always seems to be), and it turned out that it was… it was the day that he delved into the pain killers, blister tape, deep heat and Coca Cola! …but he was still loving it. We covered 203km to finish in Congleton in Cheshire.

Day 4 – Wow what a day! It started with an amazing full moon lighting our path. We then traveled around Manchester on little tracks and canal paths, and other than cycling under Manchester airport, we didn’t really know we were in a city at all. In the afternoon we were treated to one of the best cycle roads I have ever been on, with stunning Lancashire countryside and wide empty roads over rolling hills, it was spectacular! By the time we reached Kendal after 170km on the road, dad had very tired legs, but we still had the long slog up and over Shap Fell to conquer to reach our hotel. Dad had been worrying about it all day, but true to form he nailed it without any problems at all. After a quick descent we reached the pub just as the sunset turned the sky bright pink. Another 200km done finishing in Shap in the Lake District.

Day 5 – Wow wow wow!! We thought day 4 was amazing, but day 5 was epic!!!! In fact it was the best days cycling I had ever had, EVER! Another day of bluebird skies, the sun it’s warmest yet, and 200km of truly stunning scenery. Firstly, I would like to thank all drivers of motorised vehicles who have decided that the B7076 isn’t good enough for them… because it leaves a truly spectacular road for cyclists, with two big lanes and cycle lanes on both sides and no cars… I mean NO cars for 100km!! The other 100kms were also super super quite with staggering scenery. It was also one of those days were you are cycling without even knowing you’re turning your legs. My legs just propelled me along without any effort, so I just lay on my aero bars all day taking in the views over the rolling hills, while belting out 80’s rock anthems at the top of my lungs! I would occasionally look down and notice 50km have flown by and that we should stop for a quick break. The down side is I didn’t take many pics as I was too lost in my own little world. I should add that dad also loved it and that we were able to increase our average daily speed by an extra 4km/hr, so he was on fire!! We finished in Livingston (near Edinburgh).

Day 6 – Bitterly cold start to the day but we were greeted a couple of hours later with another bluebird sky! Dad nearly had a sense of humour failure mid morning. To avoid the busy A9 between Perth and Pitlochry, we were on little country lanes, but they were very ‘rolling’ with mostly short but steep 15% climbs. We would come around a corner and then I could hear behind me in the distance him yelling loudly at the hill approaching… every time it made me chuckle. After Pitlochry there was a cycle path that followed the A9 for over 80km, and we were the only people on it. The path varied from Tarmac to gravel to real ‘off-road’, but the majority was wide Tarmac of what was the old A9. We climbed up into the Cairngorms at an average 2-4% for many hours in the warm sunshine, marvelling at the stunning views. We stopped for the night in Avimore.

Day 7 – We started our day in -5C, and boy did it feel even colder than that! All the cars were heavily iced up, and my fingers and toes haven’t hurt like that since the Patagonia Icecap expedition! But yet again, a few hours later, the sun came up and thawed us out. Yes that’s the 7th day in a row where we had not seen a cloud or had a breath of wind… And yes we know how incredibly fortunate we were (our day 6 was the warmest day of the year in Avimore!) By mid morning I had said to dad that I really felt he was capable of pushing through and getting to the finish today, he was a little resistant, but I new he had a big day in him. So 250km later we reached the finish, making the signpost at 9.22pm.

So that means my dad has completed the trip ‘unsupported’ in 6 days, 14 hours and 22mins. Take into account he has only been on a road bike for a little over 5 months, the fact he is a pensioner, and that a lot of ‘supported’ commercial LEJOG trips take between 9 & 12 days… I think this makes him Awesome! I’m super proud of you dad.